1. Phishing for Leaks | 2. Crashing the Roadshow | 3. Amplifying Corporate Dissent (you are here)

This campaign is presented in draft form. It would be helpful to know what you think, what you find interesting, and potential issues. If you have expertise in underwriting, oil or gas drilling, recruiting, or other mentioned fields, and would like to contribute your knowledge, please contact me. Industry insiders and insights make these posts possible.

The 2016 election and aftermath was characterized by divisive trolling. The trolls were sloppy, cheap, and loosely affiliated. They were also extremely effective at widening division and crippling the United States’ political machinery.

Social Media is designed to make you angry. Anger drives discussion (even context-less discussion!), and discussion drives views, which create clicks, which result in Facebook, Twitter, Tumblr, and other social media companies making $0.10 off of your enraged 3am keyboard-smashing. As a result, social media is an excellent place to sow division within an organization.

In the real world, people eventually de-escalate their anger. In social media, that circuit-breaker is jammed, because it’s more profitable that way.

What if this happened to an essential company in the fossil fuel supply chain?

Amplifying dissent in essential companies within the fossil fuel value chain, can lead to sector wide slowdowns, preventing fossil fuels from being extracted and burned, while other, cleaner energy alternatives take their market share. 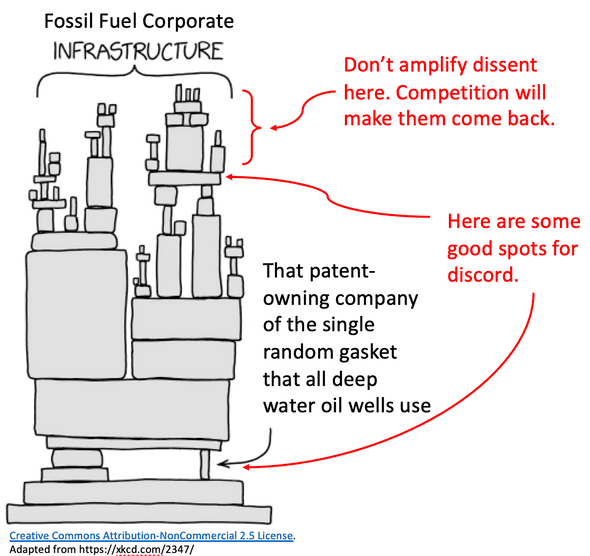 1. Leaks for Liability | 2. Crashing the Roadshow | 3. Amplifying Corporate Dissent (you are here)

What do you think?